Since Covid-19 kicked off a full-blown home fitness boom, Don Powers has seen business spike and his company grow in ways he couldn’t have imagined before the pandemic.

The company repairs and maintains workout equipment at sites like fitness centers, universities and apartment buildings, as well as residentially with at-home workout equipment. It now has franchises in 32 states as well as Canada. Most of those franchises are not brick-and-mortar. Rather, technicians travel to the equipment they need to repair.

The pandemic shifted the scope of the company’s work. Powers, the company’s founder and CEO, said that before the pandemic his services were about 97% commercial. Since Covid-19 hit, Powers says about 40% of customers at the three franchises he owns are seeking home equipment repairs.

Since commercial contracts can take time to establish, many of Powers’ newer franchises serve up to 80% residential customers.

As Americans opted to work out from home instead of exercising in crowded gyms during the pandemic, retail sales of health and fitness equipment revenue more than doubled from March 2020 to October 2020, according to data from market researcher NPD Group.

Powers and Fitness Machine Technicians felt the reverberations of that boom, noting that revenue “spiked” during the pandemic, though that wasn’t immediate. Monthly revenue across all franchises dropped from $500,000 to $325,000 at the onset of the pandemic from March to April, but returned to $500,000 in June. That trend has continued, Powers said, and in 2021 Fitness Machine Technicians reached $13 million in revenue.

“We’re a recession-resistant company because of our business,” Powers said. “When recession hits, people don’t buy things, they fix things. They call us more, so we actually get busier.”

Powers has seen his share of economic twists and turns, having founded the company in 2002. Nearly two decades on, Powers is like a runner on an accelerating treadmill, trying to keep up with the rapid pace of his business. He said that pace wasn’t quite zero to 100 mph, but “a very manageable 70 mph.”

“I get up every morning and I’m really excited to go to work because I’m excited to see the growth,” Powers said. “I can’t believe the growth that has happened in the last three and a half years. From one or two franchises to 50, I constantly have to pinch myself. Is this real? Yes, it’s real.” 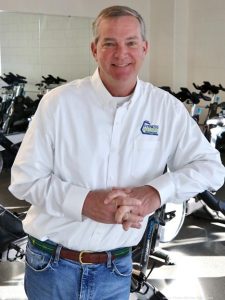 In 2022, Powers hopes to open 10 to 15 more franchises. He thinks revenue will continue to grow and is eyeing a roughly 25% increase in sales to over $16 million, but admitted that goal “may be conservative.”

The founder and CEO doesn’t want to limit himself to national expansion though – he sees Canada as a market that is “wide open.” The company has already planted its flag there and expanded with the opening of its 50th franchise last week in Vancouver, British Columbia, the company’s third franchise north of the border.

Still, Philadelphiato Powers, even if he doesn’t anticipate more franchises in the region in the coming year. He owns franchises in Chester, Montgomery and Philadelphia counties and works with notable institutions like fitness centers at Temple University, Drexel University and Saint Joseph’s University, as well as some of the city’s professional sports teams.

As a Fitness Machine Technicians owner, you have control over your business development using our proven systems and processes. Streamlined operations include:

Please visit our locations page to see if your territory is available.

Notice Regarding Franchise Offers and Sales This information is not intended as an offer to sell, or the solicitation of an offer to buy, a franchise. It is for information purposes only. Currently, the following states regulate the offer and sale of franchises: California, Hawaii, Illinois, Indiana, Maryland, Michigan, Minnesota, New York, North Dakota, Oregon, Rhode Island, South Dakota, Virginia, Washington, and Wisconsin. If you are a resident of or want to locate a franchise in one of these states, we will not offer you a franchise unless and until we have complied with applicable pre-sale registration and disclosure requirements in your state. Franchise offerings are made by Franchise Disclosure Document only.